skip to main | skip to sidebar

So my dog is doing well, still trying to keep her still, and that is not too bad. I guess the worst thing is me going stir crazy. I have only been out of the house for about 1 hour in the last week.
I have been watching every movie we have in the house, and I have done a fair bit of artwork.
What I have discovered is that it is true that people like owls. I have now painted and sold 15 sets of my owl nesting dolls. I started out figuring I would do a couple, but they continue to sell out very quickly.
They are not quick to paint or cheap to buy though. I have to order them online and wait a couple of weeks to get them...plus the shipping to Canada adds a fair bit to the price. I often do research online to make up different groupings of owls..like these ones that have sold: 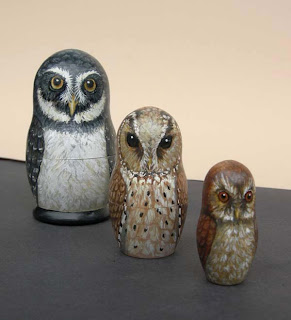 Freaks, Geeks and Wierdos is a set of unusual and or rare owls- Spectacled owl, Oriental Bay owl, and Long Whiskered Owlett. 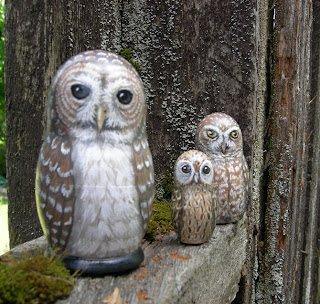 Going, Going, Gone was a set of two endangered owls Northern Spotted, and Burrowing Owls, and one exctinct owl, the little Laughing Owl. 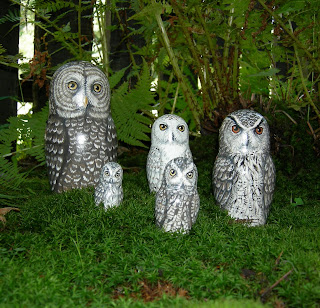 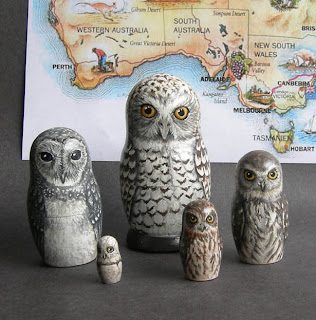 Owls Down Under is a set of Autralian Owls, the Powerful Owl, Sooty Owl, Barking Owl and Boobook Owl.

I have also done a set of European Owls and a few sets of North American Owls. I have another idea or two to still do. It does take a bit of research and finding a good clear straight on picture can be hard, but I have learned a lot about an animal that I hadn't really thought about much before.

They take quite a while to do, several days at least, and I have been trying to keep my prices down so that they can get out there. I know I don't charge for half the time they take to paint, but it's really nice to see them go to new homes all over.

If there are any owl lovers out there that have any other ideas for a set theme, let me know, I'm all ears!

Posted by SavageBabble at 6:22 PM 2 comments:

It's stitches out day!

My life is just so damn exciting.
Posted by SavageBabble at 10:39 AM No comments:

My ass is getting fat

We have no crate, we have doggie in an enclosed space. We have two couches, and a couple of chairs and coffee tables blocking her in. The TV is there too, so we can sit and watch, and she is in the center, which makes her happy. 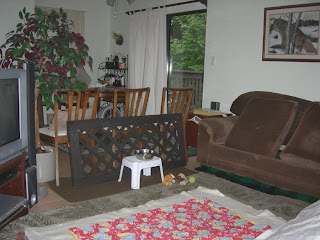 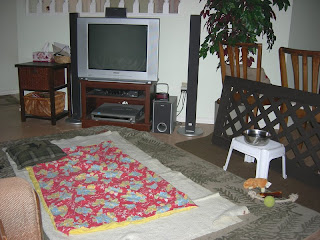 There is rarely anything on TV though, and I have gone through all the DVDs we have at home now.
I get to stay in the room with her most of the time, while everyone else goes about their business. I get to go grocery shopping once a week for about an hour, and someone else gets to watch her then, but when I'm at home, I know if I leave the room she will start getting antsy. She is putting more weight on her leg and when we take her out to go pee, or to our bedroom at night, she pulls hard and tries to go fast. It's hard to restrain her. We have been told that the more careful we are with her right now, the less problems we are likely to have, so we are being careful, we don't want to deal with this continuously for the next year like some people do when they get infections or re break the bone or pop some screws out.
Does this look like a sick dog? 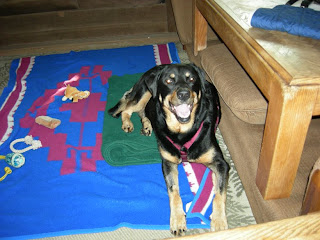 I thought I would be a better couch potato than this, but even though I have the TV and the computer right here, it is getting boring, and I feel like I am turning into a blob.
I go back to work part time at the school in 2 weeks. It will be interesting to see what happens then. It will be my first real freedom from the house, in a month.

Posted by SavageBabble at 9:47 AM No comments:

Okay, so I suck at doing a daily diary.

My dog is doing pretty well. She is much more alert, probably because she is finished with the heavy pain meds. She is putting a little weight on her leg. She hasn't been licking/chewing her stitches. She is starting to get bored being in a small space all day, but if we let her out she will roam around too much, jump up and run when someone comes in the door, etc. My god, this is going to get tricky for the next month.

She has been going pee, in her special place, and we hose it down afterwards, so that is working really well.

She gets her staples out on Monday. How they do that I don't know. She is such a nervous dog around people, they may have to knock her out agin.

Her leg yesterday...looks so much better. Her fur is starting to grow back pretty quickly too. 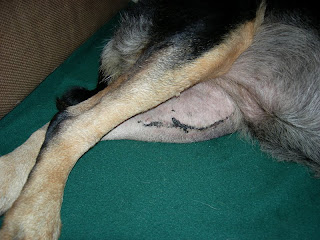 Posted by SavageBabble at 4:25 PM No comments:

Problem for the day

First night was not tooooo bad. The dog wanted to be where she usually is at night, in our room. So we sectioned off a part of it for her, and she was very happy. The only thing is that we didn't want to put the big collar on her because we figured she would hate, hate , hate it and would probably bang around a lot and keep us awake. Instead we chose to leave it off, and since I am a light sleeper and my hubby wakes up a few times in the night usually, we decided we would keep our ears open for any sounds of her licking her incision too much.

Of course neither of us got much sleep, because every time she licked her lips, our heads popped up to look at her. May try the collar tonight.

Today's task, is to figure out the peeing situation. To go outside, there is a fairly steep set of stairs (I think about 10 steps) She doesn't want to go down them and she's really not supposed to if we can help it. We got her down once, by helping with a belly strap to lift her a bit. She didn't like that and didn't want to come back in the house. My husband picked her up and carried her in. Quite a struggle and I wouldn't want him to try and carry her down. Kind of dangerous. There is no way I could get her up and down on my own.

Our solution, to turn our deck which is off the living/dining room area where she is being kept, , into a mini back yard.
We are tracking down a little bit of turf and will put it on our deck. It will be her own little space place for the next couple of months. 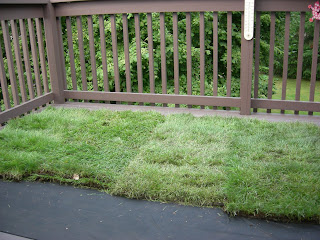 Okay, here we are. Very, very strange, I know, but it worked. We hose it down after she goes, so it doesn't get stinky. At least it's safer than risking our, and her life and limb getting her up and down the stairs. The things we do for our pets, eh?
Posted by SavageBabble at 9:05 AM No comments:

I just brought our dog home from the hospital. She hurt her leg a few weeks ago and snapped one of the ligaments in her knee. This operation is pretty darned expensive, but we were told that especialy for a big dog like her, this is by far the best option for her. She's a 120 lb rotti/lab cross.
I am going to be sitting in this room with my dog a lot in the next while, making sure she doesn't chew out her stitches or do any jumping or running, she is confined to a limited space for the next couple of weeks. Putting her in a wire cage would be a good way to keep her confined, but we rescued her from a pretty nasty situation when she was a pup, and there is no way she will stay in one without causing herself more harm. I decided to keep a kind of journal for her and our daily experience.
I'll add pictures...some may be kind of gross, but maybe someone else would like to know what to expect if this happens to their pooch. 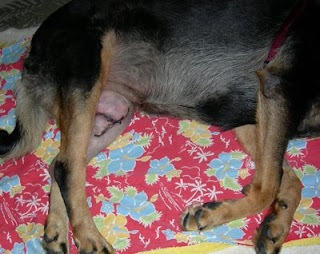 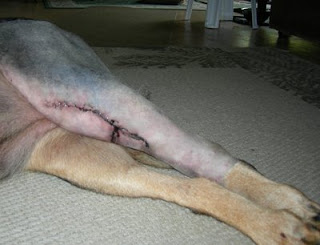 They shaved her whole leg, and while our baby is a tad overweight, her leg is quite swollen. We are told day 3 and 4 could be worse, but then it should get better. We have to apply cold (gel pack) to it 3 or 4 times a day for 10 minutes.

She is on Percocet for the first 5 days, also she is taking some other medication because when they shaved her leg they noticed that she has a skin condition that may make her itchy. (we didn't know that before)

Posted by SavageBabble at 6:58 PM 4 comments:

They're not dead, they're sleeping. 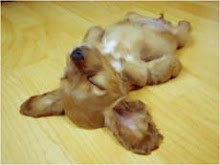 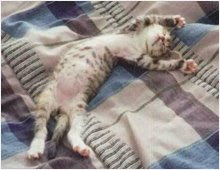 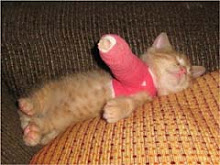 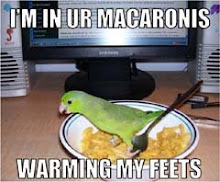 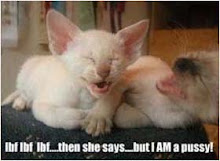 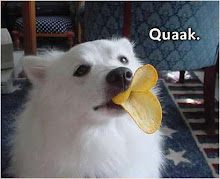 Things to check out